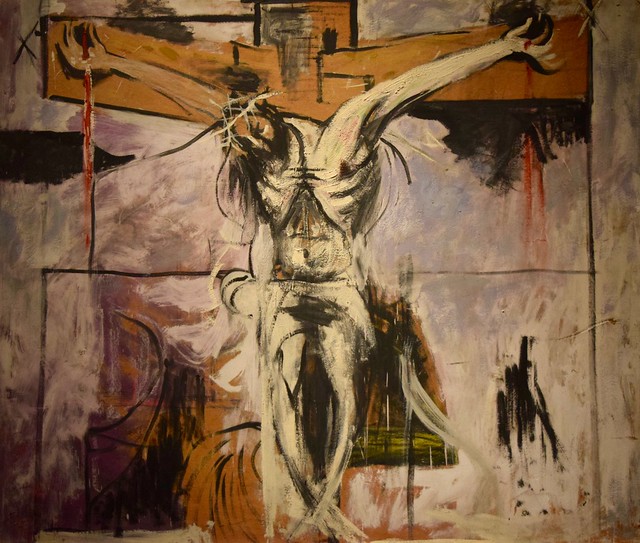 Two years ago during Lent I preached a series of sermons grappling with the horror of the cross . Why was Jesus murdered? Why was he tortured? Why was he crucified? And most pointedly, who killed Jesus? Throughout this Lenten series I made it clear that God did not kill Jesus. Jesus was killed by the principalities and powers — a term used by the Apostle Paul to describe the very powerful, the very rich, the very religious, the institutions they represent, and the spirits that operate within these institutions. Jesus was put to death by the structures of political, economic, and religious power represented by Pontius Pilate, Herod Antipas, and Joseph Caiaphas. In the Gospel narratives we see the Roman governor, the king of Judea, and the high priest acting in demonic concert to execute Jesus. God did not kill Jesus; human culture and civilization did. God did not demand the death of Jesus — we did.

These Lenten sermons on the cross turned out to be surprisingly popular. I’ve discovered that most Christians are deeply relieved to learn that the forgiveness of our sins is not predicated upon God killing Jesus. Most people take it as good news to learn that child sacrifice is not part of God’s plan to save the world. Due to the popularity of these sermons a Bible college invited me to participate in a public debate on whether or not God killed Jesus. My debate opponent held to John Calvin’s theory that God had to expend his anger upon an innocent victim before he could find it within himself to forgive sin.

Among the many problems of Calvin’s theory of the cross, one is that it turns God into a petty tyrant and a moral monster. Punishing the innocent in order to forgive the guilty is monstrous logic, atrocious theology, and a gross distortion of the idea of justice. This debate — billed as “The Monster God Debate” — was recorded and eventually viewed thousands of times online. Over the next year I received hundreds of correspondences from people around the world relieved to learn that Good Friday was not the day when God killed his Son.

What Jesus did on the cross is far more mysterious and beautiful than simply offering himself as a primitive ritual sacrifice. Ritual sacrifice may appease the Aztec god Quetzalcoatl, but it has nothing to do with the Father of Jesus. The cross is a cataclysmic collision of violence and forgiveness. The violence part of the cross is entirely human. The forgiveness part of the cross is entirely divine. God’s nature is revealed in love, not in violence. The Roman cross was an instrument of imperial violence that Jesus transformed into a symbol of divine love.

In our scriptures and creeds we confess that Christ died for our sins, but this does not mean we should interpret the cross according to an economic model where God had to gain the necessary capital to forgive sins through the vicious murder of his Son. How would this “pay off God” theory of the cross work anyway? Did God have some scale of torture that once met would extinguish his wrath? If God required the death of Jesus in order to forgive, did it have to be a violent death? Did it have to be by crucifixion? Did it have to involve the torture of the Roman scourging? Did God require a minimum number of lashes that Jesus had to endure? Was the crown of thorns necessary? Did God require a specific number of thorns to expiate his anger? And if you say, “No, that’s absurd! Some of the abuse Jesus suffered was gratuitous torture by the hands of cruel men.” Well, please explain just how this division of labor works? How much of the torture of Jesus was necessary to satisfy God’s wrath and how much was just for the sport of it? A theory of the cross that says it was God who desired the torture and murder of Jesus on Good Friday turns the Father of Jesus into a cruel and sadistic monster. It’s salvation by divine sadism.

Or perhaps we want to say it wasn’t God who demanded the violent death of Jesus, but justice. Justice demanded the crucifixion of Jesus. But this begs the question of who is really in charge? Is God merely a penultimate deity subordinate to the goddess Justice? Are we to imagine God saying, “Look, I’d really like to forgive you, but I’ve got to pay off Lady Justice first, and she’s a cruel goddess who demands the blood of an innocent victim through a torturous death?” No! God is not beholden to retributive justice.

We are the ones who demand sacrificial victims, not God. We are the ones who insist upon a brutal logic that says God can’t just forgive. We are the ones who mindlessly say, “God can’t forgive, he has to satisfy justice.” But this is ridiculous. It’s a projection of our own pettiness upon the grandeur of God. Of course God can just forgive! That’s what forgiveness is! Forgiveness is not receiving payment for a debt — forgiveness is the gracious cancellation of debt. There is no payment in forgiveness. Forgiveness is grace. God’s justice is not reprisal. The justice of God is not an abstract concept where somehow sin can only be forgiven if an innocent victim suffers a severe enough penalty. In the final analysis punitive justice is not justice at all — it’s merely retribution. The only justice God will accept as justice is actually setting the world right! Justice is not the punishment of a surrogate whipping boy! That’s injustice!

In the parable of the prodigal son, the father doesn’t rush to the servants’ quarters to beat a whipping boy and vent his anger before he can forgive his son. Yet Calvin’s theory of the cross would require this ugly insertion into Jesus’ most beautiful parable. No, in the story of the prodigal son, the father bears the loss and forgives his son from his treasury of inexhaustible love. He just forgives. There is no payment. Justice as punishment is what the older brother called justice. The only wrath we find in the parable belongs to the Pharisee-like older brother, not the God-like father. Justice as the restoration of relationship is what the father called justice. The ritual sacrifice of a substitute victim has nothing to do with the justice of God. Ritual sacrifice has its dark origins in the scapegoat mechanism where the tribe extinguishes the danger of all-against-all violence by killing a single victim. Ritual sacrifice does not originate in the heart of God, it originates in the violent heart of humanity.

In the earliest history of Israel the Law of Moses required blood sacrifices for the remission of sins. But this idea was later challenged by the prophets. Six hundred years after Moses gave the Law regarding ritual sacrifice, David said,

This is why the writer of Hebrews says,

“Indeed, under the law almost everything is purified with blood, and without the shedding of blood there is no forgiveness of sins,” (Hebrews 9:22) but then goes on to say,

“Consequently, when Christ came into the world, he said,
‘Sacrifices and offerings you have not desired,
but a body you have prepared for me;
in burnt offerings and sin offerings
you have taken no pleasure.
Then I said,
“See, God, I have come to do your will, O God”
(in the scroll of the book it is written of me).’
When he said above,
‘You have neither desired nor taken pleasure in sacrifices and offerings and burnt offerings and sin offerings’
(these are offered according to the law),
then he added,
‘See, I have come to do your will.’
He abolishes the first in order to establish the second.”
(Hebrews 10:5–9)

In other words, the psalmists, the prophets and the writer of Hebrews come to understand that God abolishes primitive ritual sacrifice in order to establish actually doing God’s will as justice. This is what we see in the life of Jesus.

Jesus was faithful to embody God’s will even to the point of shedding blood as he forgave sinners. Jesus did not shed his blood to pay off God in the form of a ritual sacrifice. That’s not what God wanted. Jesus shed his blood in faithful obedience to his Father’s will, demonstrating divine forgiveness…even as he was crucified! As Jesus told the sacrificed-obsessed Pharisees, “Go and learn what this means, ‘I desire mercy, not sacrifice!’” (Matthew 9:13)

(The artwork is Study for Crucifixion by Graham Sutherland, 1947)

The post Who Killed Jesus? appeared first on Brian Zahnd .