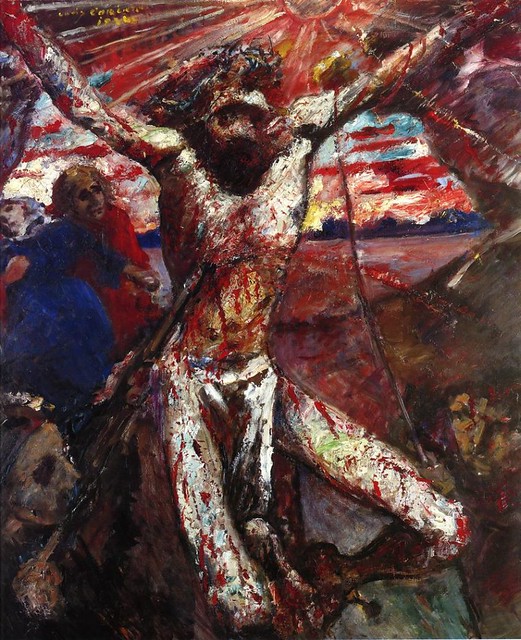 Here’s a big question. What is God like? I suppose this is the biggest question theology can ask. And we don’t need to be a theologian to ask this question. It’s one of the most basic questions facing anyone who attempts to worship or even just think about God. But how shall we answer the question?

Our capacity for imagining God seems virtually limitless. Is God like Zeus whose incited anger results in hurled thunderbolts? Is God like Ganesh, the lovable elephant-headed god of prosperity from the Hindu pantheon whose idol I’ve seen in hotel lobbies across India? Is God like the comic white-bearded old man sitting behind a computer from a Far Side cartoon? Does God bear any resemblance to the primitive tribal deities who lead their people in waging war on other people? Is God totalized Will-To-Power whose omnipotence controls every event in the universe? Is God the aloof and absent clockmaker of Thomas Jefferson and the eighteenth-century deists? Is God the amorphous everything and nothing of New Age spirituality? And so on.

Part of the genius of the ancient Hebrew religion was its unique prohibition against graven images. The problem with idols is that they put too fine a point on what God is like. The second of the Ten Commandments — “You shall not make for yourself an idol” — prevented Israel from claiming too much precision about their knowledge of God. The image of God would not be carved in stone or cast in bronze. Refusing to make an image of God is a marvelous concession to humility.

And yet Christians do something different; for we do talk about the image of God being definitively revealed — definitively revealed in the life of Jesus Christ. This is why the church, in the Second Council of Nicaea in 787, ruled in favor of icons, arguing that since Jesus bears God’s perfect image (the Greek word is ikon), icons are therefore an acceptable part of Christian worship. The church fathers recognized that in Christ, God had given humanity, not an idol, but an icon of the divine nature. The confession of the Second Council of Nicaea was more than a ruling in support of the sacred art of Christian iconography, it was an acknowledgement that in the life of Jesus Christ we find a definitive answer to the question of what God is like. God is like Jesus!

But we should admit the strangeness of this. We Christians are a peculiar people. We worship — as incredible as it sounds! — a crucified God. All religions more or less worship some version of a powerful, glorious, triumphant God; but Christians are unique in worshiping a betrayed, tortured, crucified God. This is the original scandal of the Christian faith — the worship of a God who was nailed to a tree!

The shockingly succinct phrase “Crucified God” was coined by Jürgen Moltmann as the title to his theological masterpiece published in 1972 . Jürgen Moltmann was raised as a secularist in Germany during World War II. At the age of twenty, while serving as a soldier in the German army, Moltmann was captured and placed in an English prisoner of war camp. Reading the New Testament as a prisoner of war the young secularist encountered Jesus’ cry from the cross — “My God, my God, why have you forsaken me?” — and thought, “here is someone who understands me.” In time Jürgen Moltmann became a Christian and eventually one of the most important theologians of the twentieth century.

At the heart of the Christian faith lies the scandal of the crucified God. Over the centuries there have been attempts to soften the scandal of a crucified God by giving nice, tidy explanations of it. These “atonement theories” are attempts to reduce the scandal and mystery of the cross to rational and utilitarian formulas. But I’m suspicious of this project. For the most part I find these theories unconvincing. Some theories are merely inadequate, while others are repellent. Especially odious are those theories that ultimately portray God as sharing the petty attributes of the primitive and pagan deities who can only be placated by the barbarism of child sacrifice. This simply will not do. God is not like Molech!

Unfortunately over the last thousand years the Western Church has drifted into the idea that God required the violent death of his Son in order to satisfy his honor and pay off justice. (A theory that was wisely rejected in the Eastern Church.) In an attempt to explain the cross according to the honor codes of feudalism, the character of God has been viciously maligned. The cross is many things, but it is not a quid pro quo to mollify an angry God. Above all things the cross, as the definitive moment in Jesus’ life, is the supreme revelation of the very nature of God. At the cross Jesus does not save us from God — at the cross Jesus reveals God as savior! When we look at the cross we don’t see what God does, we see who God is!

When the cross is viewed through the theological lens of punishment, God is seen as an inherently violent being who can only be appeased by a violent ritual sacrifice. Those who are formed by this kind of theology harbor a deep-seated fear that God is a menacing deity from which they need to be saved. But is it true?! Is God a vengeful giant whose essential nature requires him to vent his wrath upon sinners with omnipotent fury? Or is God co-suffering love whose very nature is to offer unconditional forgiveness?

A forgiveness-centered view of the cross saves us from a pathological anxiety about God which is so detrimental to the soul. We can now understand that the monster god is our own creation — a monster born of our projected issues of anxiety, anger, and shame. We are the Dr. Frankenstein who created the monster god. The image of a terrifying god is created in the hearts of anxious people. The image of a raging god is born in the hearts of angry people. The image of a condemning god is created in the hearts of ashamed people. Because we are such anxious, angry, and ashamed people, we imagine horrors where we should be seeing salvation. If we persist in looking at the cross through the distorted lens of fear, anger, and shame, we will imagine that the cross is what God does in order to forgive, instead of perceiving the cross as what God endures as he forgives.

Jesus’ entire life was a demonstration of the true nature of God. As Jesus heals the sick, forgives the sinner, receives the outcast, restores the fallen, and supremely as he dies on a cross forgiving his killers, he reveals what God is like. To see Jesus is to see the Father. At last we know that God is not like the thunderbolt-hurling Zeus or any of the other angry gods in the pantheon of terrorized religious imagination. God is like Jesus, nailed to a tree, offering forgiveness.

(The artwork is Red Christ by Lovis Corinth)

The post The Crucified God appeared first on Brian Zahnd .